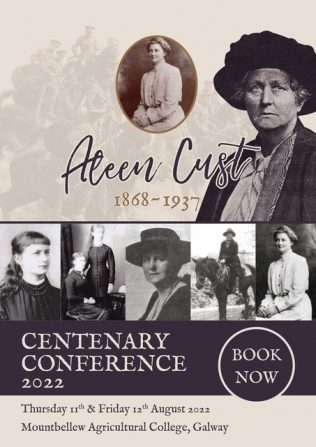 The Aleen Cust Conference is taking place in the Agricultural College, Mountbellew on 11 (Scientific Day) and 12 (Heritage Day) August.

Find out more and register for this FREE event here

The full programme is available to view and download here

Aleen Cust was a pioneering Tipperary woman who commenced her studies in veterinary science at the New Veterinary College in Edinburgh. She qualified in 1900 but was not allowed to call herself a veterinary surgeon as the Royal College of Veterinary Surgeons (RCVS) claimed to have no power to admit women. After over 20 years of fighting, Aleen Cust was finally awarded her qualification in December 1922.

Aleen Isabel Cust was born on 7 February 1868 at Cordangan Manor, County Tipperary. She was one of six children of Sir Leopold and Lady Isabel Cust. Her father, a land agent for the Smith-Barry family, died when Aleen was just 10 years old and her mother took the family to England.

Her guardian encouraged her decision to become a veterinary surgeon, despite her mother’s disapproval. She enrolled in the New Veterinary College, Edinburgh. She was an excellent student, coming top of her class in her first year. She completed her training in 1900, but was barred because of her gender from using the title ‘veterinary surgeon’.

Aleen had excellent references and when William Byrne, an esteemed vet in Athleague, Co Roscommon, heard of her case he offered her a role working as his assistant.

She was appointed as a veterinary inspector by Galway County Council in 1905  under the Diseases of Animals Acts, an appointment that was denied by the RCVS due to her lack of professional recognition. The post was advertised again, and when Cust was again selected for the post  in 1906 an agreement was reached under which she carried out the duties of the position with an amended title of “inspector”.

In 1915, she took a leave of absence from Galway County Council and drove her own car to Abbeville, France, to volunteer in the treatment and care of horses on the Western Front. She worked as a bacteriologist with an animal vaccine unit and looked after many horses.

The passage of the Sex Disqualification (Removal) Act in 1919 prohibited the exclusion of women from professions, and meant that the RCVS were now required to consider Aleen’s membership. She was finally awarded her diploma in December 1922.

She sold her practice in Ireland in 1924 and moved to Plaitford, Hampshire, England.  Aleen died in Jamaica on 29 January 1937. In her will she left £5,000 for a scholarship in veterinary research (with a preference for female candidates), and £100 for a kennel at the RCVS in memory of her spaniels.

Aleen Cust was the first female Veterinary Surgeon, admitted to the Register of Veterinary Surgeons (RCVS) in 1922. She is a leading example of a visionary in the sphere of animal welfare, overcoming many barriers to practise a profession she dedicated her life to, against many odds.

This is further relevant to the Sex Disqualification Act of 1919 which enabled females to gain admittance to the professions for the first time in Ireland.

Volunteering in the treatment and care of horses on the Western Front and working with the farming community in Co Roscommon and Co Galway was not the typical life path for a woman of her aristocratic background.

By undertaking this commemorative project it will assist in creating a greater awareness and knowledge of what Ireland was like one hundred years ago and the hardships, difficulties that people endured and how Aleen’s perseverance triumphed over adversity.

It will also shed light on the life of one of Ireland’s unsung heroes and ensure that her work, sacrifices and her determination are known by those of us who live in the Ireland of 2022.

Who is the Aleen Cust Memorial Society?

The Aleen Cust Memorial Society is an ad hoc group of 3 veterinary surgeons who came together in early 2021 to remember and honour a brave courageous woman who suffered tremendously both personally and professionally in order to achieve her dream to become the first lady veterinary surgeon in Ireland, England, and indeed Europe.

Mission statement of the group:

1. To make her name and struggle better known by her fellow Irish in general and by her profession in particular. She has been totally forgotten about and has been written out of history.

2. To find her grave and to place some acknowledgement on it in this the centenary year of her graduation.

In our few short months in existence the group achieved a lot but 2 things stand out:

They discovered a diary previously unknown of a 4 day fishing trip that she and 3 friends spent on Lough Mask in August 1913.This describes what they did during that time, conversations they had,  and also has Aleen’s handwriting.  It also contains poetry composed by them.

Secondly, they discovered her grave in Jamaica. A record of her burial was never recorded or documented in any official or church record in Jamaica.  As a result of a sheer stroke of luck the group located it. Now the grave of Aleen Isobel Cust MRCVS is recorded in the official registry of St Andrew’s Church, Kingston, Jamaica for the very first time. The group persevered looking for Aleen’s grave despite having been officially told 6 times she was not buried there.

Only for their existence would her grave ever have been found?

The members of The Aleen Cust Memorial Society are: